Angela Gerekou is a Greek politician, actress and architect who served as vice minister of Ministry of Culture and Sport, in the cabinet of George Papandreou. As an actress, she is known for her starring role in the television series Magiki nyhta, and as Eleni Kaleas in the 1986 film The Girl from Mani. She played Tara in the 1990 film Hired to Kill. Born on April 15, 1959 in Corfu Island, in the Ionian Sea, Greece, she studied Architecture at the University of Miami School of Architecture Rome Studio and acting at the London Academy of Theater Studies. On August 2, 1996, she married Greek Actor and Singer Tolis Voskopoulos, with whom she has a daughter, Mary Voskopoulos. 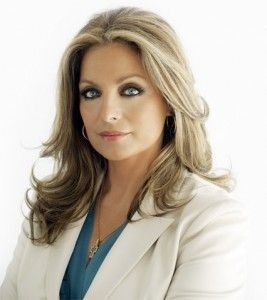 Angela Gerekou Facts:
*She was born on April 15, 1959 in Corfu Island, in the Ionian Sea, Greece.
*She is the former member of the Greek Parliament.
*She speaks English, Italian and Frenchh fluently.
*Playboy magazine named her one of the most beautiful and sexiest politicians in the world in 2009 and 2010.
*Visit her official website: www.gerekou.gr
*Follow her on Facebook.