Angelica Panganiban is a Filipino-American actress of film and television. She is best known for her roles in films, such as Santa Santita, A Love Story, I Love You, Goodbye, Segunda Mano, Every Breath U Take, One More Try, Ang Alamat ni China Doll, That Thing Called Tadhana, and The Unmarried Wife, and in television Maalaala Mo Kaya, Maging Sino Ka Man: Ang Pagbabalik, Iisa Pa Lamang, Banana Sundae, 100 Days to Heaven, Apoy Sa Dagat, Pangako Sa ‘Yo, and Playhouse. For her performance in Segunda Mano, she received the 2012 FAMAS Award for Best Supporting Actress. Born Angelica Charlson on November 4, 1986, in Payatas, Quezon City, to a Filipino mother, who died in 2008, and an American father, who served in the U.S. Navy, Angelica was adopted by another couple. She started her career at the age of six, appearing in the TV show, Love Note. Following her high school graduation, Angelica studied mass communication at Thames International Business School. She later attended Ateneo de Manila University where she majored in Bachelor of Fine Arts, Creative Writing. She was in a relationship with actor Derek Ramsay for six year. She briefly dated John Lloyd Cruz. 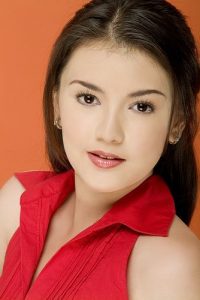 Angelica Panganiban Facts:
*She was born on November 4, 1986 in Payatas, Quezon City.
*She acquired the surname Panganiban from her adoptive family.
*She was a cheerleader and a Feature Editor at her school newspaper.
*She is a dual Filipino/American citizen.
*She dated former on-screen love team Carlo Aquino during their teens and remained friends after their break-up.
*Follow her on Twitter, Facebook and Instagram.