Angie Harmon is an American actress and model born in Dallas, Texas. She is best known for her roles as Ryan McBride on Baywatch Nights, and as Abbie Carmichael on Law & Order. She portrayed Jane Rizzoli on the TNT series Rizzoli & Isles. Her well-known films include Fun with Dick and Jane, The Deal, and Seraphim Falls. Born Angela Michelle Harmon on August 10, 1972 in Dallas, Texas, USA, to Lawrence Paul Harmon and Daphne Demar Caravageli, both of her parents were models. She is of German and Irish descent on her father’s side, and of Greek descent on her mother’s side. She is a 1990 graduate of Highland Park High School. She had three daughters with former NFL defensive back Jason Sehorn, whom she was married from 2001 to 2016. 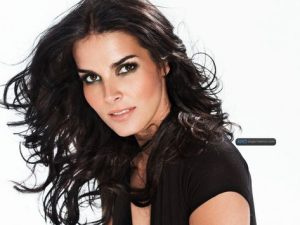 Angie Harmon Facts:
*Both of her parents were models.
*She won a Seventeen modeling contest in 1987.
*She was discovered on an airline flight by David Hasselhoff.
*In January 2013, she was named an ambassador of the United Nations Children’s Fund (UNICEF).
*She is good friends with Garcelle Beauvais.
*Follow her on Twitter, Facebook and Instagram.