Embeth Davidtz is a South African and American actress. She is best known for her role as Miss Honey in the 1996 film Matilda. Her other film roles include Schindler’s List, Army of Darkness, Bicentennial Man, Junebug, Mansfield Park, and Fracture. Her television credits include Californication and Mad Men. Born Embeth Jean Davidtz on August 11, 1965 in Lafayette, Indiana, to John and Jean Davidtz, she moved to South Africa when she was young. She has a brother and a sister. She belongs to Dutch, English, and French descent. After graduating from The Glen High School in Pretoria in 1983, she attended Rhodes University in Grahamstown, where she earned her degree. She has been married to Jason Sloane since 2002. They have two children. 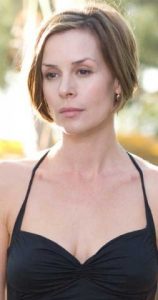 Embeth Davidtz Facts:
*She is of Dutch, English, and French descent.
*Her father was a college professor.
*She spent most of her growing years in South Africa.
*She learned Afrikaans before attending school classes in South Africa.
*Follow her on Twitter.