Ann Curry is an American journalist and television personality who co-hosted the Today Show on NBC from 1997 to 2012. She also worked as an anchor at Dateline NBC from 2005 until 2011. She has reported from the wars in Syria, Congo, Darfur, the Central African Republic, Kosovo, Lebanon, Israel, Iraq and Afghanistan. Born on November 19, 1956 in Agana, Guam, to parents Hiroe Nagase and Bob Curry, she is the eldest of five children. Her father is an American, who is of French, Scottish, Irish and Cherokee descent and her mother is Japanese. Curry was raised in Ashland, Oregon. After graduating from Ashland High School, she attended and graduated in 1978 from University of Oregon with a B.A. in journalism. She began an internship in 1978, at KTVL in Medford, Oregon, eventually becoming the station’s first female news reporter. On October 21, 1989, she married Brian Wilson Ross whom she met in college at the University of Oregon. They have two children: a son named William and a daughter named McKenzie. 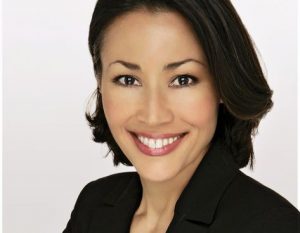 Ann Curry Facts:
*She was born in Agana, Guam on November 19, 1956.
*She is the eldest of five children.
*Emmy Award-winning journalist.
*People Magazine named her one of the top 50 Most Beautiful People in the World in 1998.
*She used to work as a cocktail waitress.
*She founded her own multi-platform media startup in January 2015.
*Her parents met while Ann’s father was serving in the U.S. Navy during the US occupation of Japan after World War II.
*Follow her on Twitter, Facebook and Instagram.