Anna Nicole Smith was an American model, actress and television personality. She first gained fame as Playboy magazine’s 1993 Playmate of the Year. She modeled for many fashion houses such as Guess, Heatherette, H&M, and Lane Bryant. She became much publicized for her marriage to 89-year-old oil tycoon J. Howard Marshall II in 1994. She starred in the E! network’s The Anna Nicole Show. Born Vickie Lynn Hogan on November 28, 1967 in Houston, Texas, to parents Virgie Mae and Donald Eugene Hogan, she grew up in Mexia, Texas. She was raised by her mother and aunt. She had five half siblings: Donna Hogan, Amy Hogan, David Tacker Jr., Donnie Hogan, and Donald Hart. She attended Mexia High School, but dropped out during her junior year. She was married to J. Howard Marshall II and Billy Smith. She had two children, Dannielynn and Daniel. She died in Hollywood, Florida, USA on February 8, 2007 at age 39. 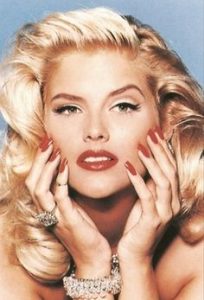 Anna Nicole Smith Facts:
*She was born on November 28, 1967 in Houston, Texas, USA.
*She was the daughter of Donald Eugene Hogan and Virgie Mae Arthur.
*She started modeling at age 20.
*She was named Playboy’s Playmate of the Year in 1993.
*She was a supporter of gays and lesbians.