AnnaLynne McCord is an American actress and former model best known for her starring role as Naomi Clark in the CW series 90210. Her other credits include American Heiress, Nip/Tuck, Transporter 2, Day of the Dead, and the 2012 film Excision. She began modeling at the age of fifteen. As a Model, she appeared in ads for various brands, including Estee Lauder, and also briefly modeled for Seventeen. 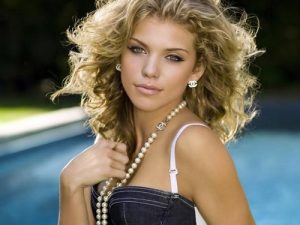 AnnaLynne McCord Education: Woodland Regional High School
*She was home-schooled and graduated from high school at the age of 15.

AnnaLynne McCord Facts:
*She began modeling at the age of 15.
*She revealed that she was raped at age 18.
*She received the Hollywood Life Young Hollywood Superstar of Tomorrow Award.
*She wanted to be an archaeologist after watching Harrison Ford in Raiders of the Lost Ark.
*She was ranked #21 in the 2009 Maxim list of Hot 100 Women.
*She was voted #69 in the 2009 FHM list of “100 Sexiest Women in the World”.
*She was being considered for the role of Heidi in New Moon, the sequel to the 2008 film Twilight, however, she did not get the role.
*Follow AnnaLynne on Twitter, Facebook and Instagram.