Jelena Janković is a Serbian professional tennis player who was ranked world no. 1 for seventeen consecutive weeks. She won the 2007 Wimbledon Mixed Doubles title with Jamie Murray. Jankovic was born in Belgrade, Serbia, to Snezana and Veselin Jankovic, and has two brothers named Stefan and Marko. She is a student at the Megatrend University in Belgrade, studying economics. She has been dating Montenegrin waterpolo player Mladjan Janovic since the 2008 Summer Olympics. 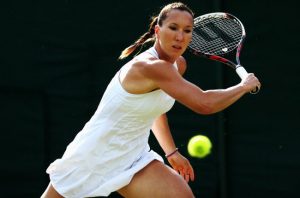 Relationships / Affairs / Boyfriend:
She has been in a relationship with Montenegrin waterpolo player Mladjan Janovic since the 2008 Summer Olympics.

Jelena Jankovic Facts:
*Fluent in Serbian, English and French.
*Her parents Veselin & Snežana, both are Economists.
*She admires Monica Seles the most of all tennis players.
*She competed at the 2008 US Open.
*Follow her on Twitter and Facebook.