AnnaSophia Robb is an American actress, model and singer. She has starred in such films as Because of Winn-Dixie, Charlie and the Chocolate Factory, Bridge to Terabithia, Race to Witch Mountain, Soul Surfer, and The Way, Way Back. From 2013 to 2014, Robb portrayed Carrie Bradshaw in The CW’s teen drama The Carrie Diaries. She also portrayed the role of Alice Green in the PBS Civil War historical drama series Mercy Street from 2016 to 2017. Born on December 8, 1993 in Denver, Colorado, USA, to Janet, an interior designer, and David Robb, an architect, she was raised in a devout Christian home and was home-schooled. She competed in dance and gymnastics for four and a half years. She was scouted by an agent when she was nine years old. Her first major role was the title role in the television special, Samantha: An American Girl Holiday. In 2014, she enrolled at New York University and graduated in 2018. 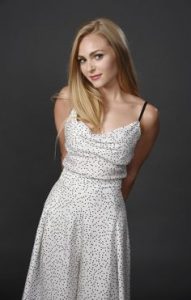 AnnaSophia Robb Facts:
*She was born on December 8, 1993 in Denver, Colorado, USA.
*She is an only child with no siblings.
*She was named after her maternal great-grandmother, Anna Sophie, and paternal grandmother, Anna Marie.
*She belongs to Danish, English, Irish, Scottish, and Swedish descent.
*She has practiced dance and gymnastics for four and a half years.
*In 2009, she won a Denver Film Festival Rising Star Award for her performance in Race to Witch Mountain.
*She is a fan of the The Black Eyed Peas.
*She is friends with actress Taylor Dooley.
*She is best friends with actor Josh Hutcherson.
*She has a dog named Bella, who is a cross between a Maltese and a poodle.
*She enjoys dancing, rafting, singing, reading, and snowboarding.
*Visit her official website: www.annasophiarobb.com
*Follow her on Twitter, Facebook and Instagram.