Anne Hathaway is an American film, television and stage actress and singer. She is best known for her roles in the films The Princess Diaries, Rachel Getting Married, The Devil Wears Prada, Love and Other Drugs, Les Miserables, Get Smart, Ocean’s 8, and Alice in Wonderland. Hathaway’s other notable film appearances include: Valentine’s Day, Colossal, Bride Wars, Interstellar, and The Intern. She is the recipient of various accolades including; an Academy Award, a Golden Globe, a British Academy Film Award, and a Primetime Emmy Award. Born Anne Jacqueline Hathaway on November 12, 1982 in Brooklyn, New York City, New York, USA, to parents Kate McCauley Hathaway, an actress, and Gerald T. Hathaway, a lawyer, her older brother, Michael is a writer and her younger brother, Tom is an aspiring actor. Her ancestry includes Irish, English, German, and French. Anne did her schooling at Brooklyn Heights Montessori School and Wyoming Elementary School in Millburn, and graduated from Millburn High School. She landed her first major role in the 1999 short-lived television series Get Real. Her breakthrough role came when she played Mia Thermopolis in the successful Disney comedy The Princess Diaries (2001). She has been married to actor and jewelry designer Adam Shulman since September 29, 2012. They have a son together. 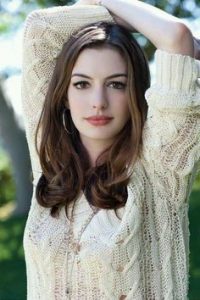 Anne Hathaway Facts:
*She was born on November 12, 1982 in Brooklyn, New York City, New York, USA.
*She suffered from depression when she was a teenager.
*Her older brother Michael is gay.
*One of the world’s highest-paid actresses (2015).
*Received an Academy Award for her work in Les Misérables.
*She was ranked #85 on FHM’s sexiest women in the world list 2006.
*People Magazine named her one of the Most Beautiful People in 2009.
*In 2009, she appeared in the Forbes Celebrity 100.
*People Magazine named her one of the top 100 Most Beautiful People in the World in 2006, 2009 and 2010.
*She and James Franco hosted the 83rd Academy Awards in 2011.
*She is friends with Joseph Gordon-Levitt, Jake Gyllenhaal, Les Misérables and Bradley Cooper.
*Her favorite actors are Johnny Depp, Joaquin Phoenix and Ralph Fiennes.
*She is a fan of Audrey Hepburn, Meryl Streep, and Judy Garland.
*In 2004, she dated Italian real estate developer Raffaello Follieri.
*Follow her on Facebook and Instagram.