Tisha is a Bangladeshi films and television actress and model. She is known for her roles in films Doob: No Bed of Roses, Television, Haldaa, and Third Person Singular Number. Her television credits include Bahattor Ghonta, Opekkhay Thakun, Day Out, Golapbhromon, Tumi Ami, Ei Boishakhe, Angry Bird, and Ayesha. Tisha won Bangladesh National Film Award for Best Actress for her performance in the film Ostitto. As a model, she first worked for Meril Lipjel, and appearted in advertisements for Coca-Cola, Bombay Sweets, City cell and Keya Cosmetics, and won the Meril Prothom Alo Awards for modeling in 2003 and 2004. Born Nusrat Imrose Tisha on February 20, 1989 in Rajshahi, Bangladesh, to parents Enamul Hoque and Shaheen Mahfuja Hoque, she started learning music when she was just five years old. She attended North South University in Dhaka, Bangladesh. She began her acting career appearing in the drama Shat Prohorer Kabbo directed by Ahsan Habib and written by Anonto Heera. She married director Mostofa Sarwar Farooki on July 16, 2010. 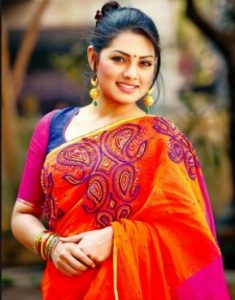 Tisha Facts:
*She was born on February 20, 1989 in Rajshahi, Bangladesh.
*She is the daughter of Enamul Hoque and Shaheen Mahfuja Hoque.
*She formed a band named Angel Four.
*For her work in the film Ostitto, she received Bangladesh National Film Award for Best Actress.
*In 2013, she became the first “Goodwill Ambassador of South Korea in Bangladesh” for two years as part of the celebration of 40th anniversary of the two countries bilateral relations.
*Follow her on Facebook.