Annette Bening is an actress known for roles in the films The Grifters, Being Julia, Bugsy, American Beauty, Valmont, and The Kids Are All Right. She is also famous for her portrayal of Sydney Ellen Wade in The American President, Dorothea Fields in 20th Century Women, and Deirdre Burroughs in Running with Scissors. Born Annette Francine Bening in Topeka, Kansas, she is the youngest of four children of Shirley, a soloist and church singer, and Arnett Grant Bening, an insurance salesman. She is of German, English, Irish and Welsh descent and has two brothers named Brad and Byron Bening, and one sister named Jane Bening. She married Warren Beatty in March 1992. They have four children: Benjamin, Kathlyn, Isabel, and Ella. She was previously married to choreographer J. Steven White from 1984 to 1991. 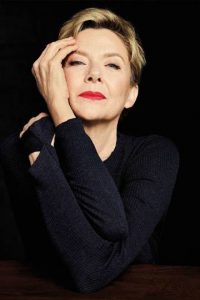 Annette Bening Facts:
*She is of German, English, Irish and Welsh descent.
*She was born in Topeka, Kansas and was raises in California.
*Twice lost to Hilary Swank for the Best Actress Oscar, once for 1999 and again for 2004.