Ansel Elgort is an American actor and singer best known for his roles as Tommy Ross in the 2013 film Carrie, Caleb Prior in The Divergent Series, Augustus Waters in The Fault in Our Stars, and the title character in the action thriller Baby Driver. Elgort was born in New York City to photographer Arthur Elgort and opera director Grethe Barrett Holby. He is of Russian Jewish descent on his father’s side, and of Norwegian, English and German descent on his mother’s side. He has two siblings, filmmaker Warren and photographer Sophie. He is in a relationship with Violetta Komyshan since 2012. 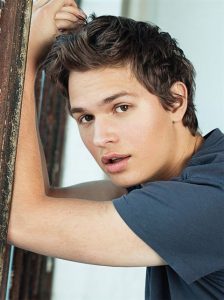 Ansel Elgort Facts:
*He belongs to Russian Jewish, Norwegian, English and German descent.
*He modeled for Teen Vogue magazine at the age of 15.
*He lost his virginity at 14.
*He has a dog named Galo.
*He is a New York Knicks fan.
*He is friends with Joe Jonas.
*Follow him on Twitter, Facebook and Instagram.