American professional basketball player Anthony Davis Biography, Family, Career, Height, Weight, Age, Measurements will be discussed here. Anthony Davis personal details can be checked here. He was honoured as one of the 75 Greatest Players in NBA History in 2021.

Anthony Davis is an American professional basketball player who plays for the Los Angeles Lakers of the National Basketball Association (NBA). He plays the power forward and center positions. He is an eight-time NBA All-Star and has been named to four All-NBA First Teams and four NBA All-Defensive Teams. Davis played for the USA’s National Team at the 2012 Olympics and won the gold medal.

Born as Anthony Marshon Davis Jr. on March 11, 1993 in Chicago, Illinois, Davis grew up in the South Side and played high school basketball for Perspectives Charter School, where he had attended school since 6th grade. He graduated from Perspectives Charter School and went to the University of Kentucky where he played for the Wildcats coached by John Calipari until the end of his sophomore year. He led Kentucky to a national championship and was named the most outstanding player of the NCAA tournament. Davis was chosen as the first overall pick in the 2012 NBA draft by the New Orleans Pelicans, known then as the New Orleans Hornets, and was selected that summer to play in the 2012 Olympics. 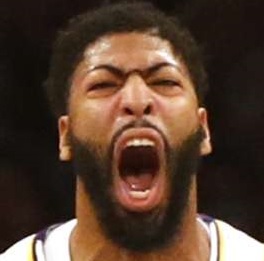 Anthony Davis Facts:
*He was born on March 11, 1993 in Chicago, Illinois, United States.
*He was selected by the New Orleans Pelicans, known then as the New Orleans Hornets with the first overall pick in the 2012 NBA draft.
*In his first season with the Lakers, he won an NBA championship in 2020.
*Follow him on Twitter, Facebook and Instagram.