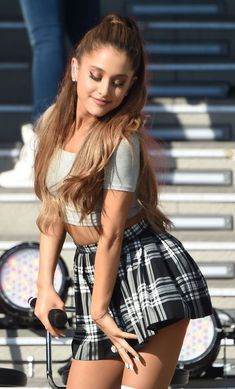 Ariana Grande Facts:
*She was born on June 26, 1993 in Boca Raton, Florida, USA.
*She started performing onstage when she was a child.
*She made her acting debut as Charlotte in the Broadway musical 13 in 2008.
*Her second studio album, My Everything featured the hit singles “Break Free” and “Problem.”
*Her concert was bombed in the 2017 Manchester attacks.
*in 2019, her album “Sweetener” won the Grammy for “Best Pop Vocal Album”.
*She is best friends with singer Victoria Monet.
*She is a vegan and stays away from dairy, and non-vegetarian food.
*She is a big fan of Helena Bonham Carter.
*She is allergic to tomatoes.
*She announced her support for Senator Bernie Sanders’s second presidential bid in November 2019.
*She has five pet dogs; Toulouse, Ophelia, Coco, Cinnamon, and Sirius.
*As of 2019, she has around 43 known tattoos.
*Visit her official website: www.arianagrande.com
*Follow her on Twitter, YouTube, SoundCloud, Facebook and Instagram.