Ariarne Titmus is an Australian swimmer who won two gold medals for Australia at the 2020 Summer Olympics in Tokyo in 2021. Titmus won gold in the 4 x 200-metre freestyle event at the 2018 Commonwealth Games. On December 14, 2018, Titmus set a new world record in the women’s short course 400-metre freestyle competition of the 2018 FINA World Swimming Championships with a time of 3:53.92, breaking the record set by Wang Jianjiahe two months earlier by 0.05 seconds. In 2019, Titmus was a member of the inaugural International Swimming League, representing the Cali Condors, who finished third place in the final match in Las Vegas, Nevada, in December. Titmus won the 400-metre freestyle several times throughout the season, including the final. 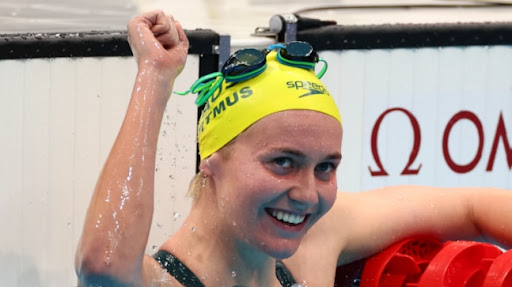 Ariarne Titmus Facts:
*She was born on September 7, 2000 in Launceston, Australia.
*In 2015, Titmus and her family moved from Tasmania to Queensland for better training opportunities.
*She won a bronze medal at the 2017 World Championship and won three medals at the 2018 commonwealth games including three gold medals.
*She won two gold medals for Australia at the 2020 Summer Olympics in the women’s 200-metre and 400-metre freestyle.
*She is a fan of television actor Cole Sprouse.