Arnold Schwarzenegger is an Austrian-American actor, film producer, screenwriter, director, and former politician and professional bodybuilder who served as the 38th Governor of California for two consecutive terms from 2003 to 2011. He is best known for his roles in the films Conan the Barbarian, Predator, the Terminator series, Twins, Kindergarten Cop, Junior, Jingle All The Way, True Lies, The Running Man, Commando, and Total Recall. Before becoming an actor, Schwarzenegger was a bodybuilder and had won the Mr. Universe title five times and the Mr. Olympia title seven times. Born Arnold Alois Schwarzenegger on July 30, 1947 in Thal, Austria, to parents Aurelia and Gustav Schwarzenegger, he relocated to the United States in 1968 at the age of 21. He was educated at University of Wisconsin–Superior and Santa Monica College. Schwarzenegger was married to television journalist Maria Shriver from 1986 to 2017. They have two daughters, Christina and Katherine, and two sons, Christopher and Patrick. He also has a son with another woman. 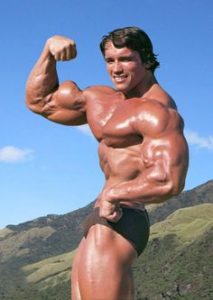 Arnold Schwarzenegger Facts:
*He was born on July 30, 1947 in Thal, Austria.
*He began lifting weights at the age of 15, and won Mr. Olympia title seven times (1970-1975, 1980).
*He became an American citizen in 1983.
*He is widely considered to be one of the greatest bodybuilders of all time.
*He is the second actor to be elected Governor of California. The first was Ronald Reagan.
*He purchased a private Gulfstream jet for $38 million in 1997.
*In December 2001, he broke six ribs in a motorcycle crash.
*He was very good friends with WWE Hall of Famer André the Giant.
*He is good friends with fellow bodybuilder Sven-Ole Thorsen.
*At his bodybuilding peak his chest was 57″, waist 34″, thighs 28½”, biceps 22″, calves 20″, and his competition weight was 235 lbs (260 lbs off-season).
*Visit his official website: www.schwarzenegger.com
*Follow him on Twitter, YouTube, Pinterest, Facebook and Instagram.