Ashley Fink is an American television and movie actress and singer. She is best known for her portrayal of Lauren Zizes on Fox’s musical television series Glee, and for her role as Carter McMahon on the ABC Family show Huge. Her other notable television appearances include: Warren the Great, and Austin & Ally. Fink has also played prominent roles in the films Fat Girls, All About Evil, and Glee: The 3D Concert Movie. Born Ashley Rae Fink on November 20, 1986 in Houston, Texas, she has an older sister named Stephanie, and two younger sisters named Amy and Amanda. Fink started acting at the age of four after playing the lead role in her school’s holiday play. 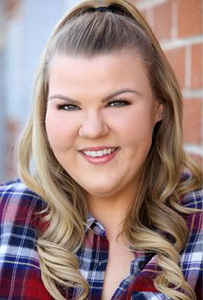 Ashley Fink Facts:
*She was born on November 20, 1986 in Houston, Texas, USA.
*She began acting at the age of 4.
*Her first on-screen role was in the Tribeca Film Festival hit Fat Girls (2006).
*She is best friends with her Glee co-star Chris Colfer.
*She has a cat named Fred.
*Follow her on Twitter, Facebook and Instagram.