Ashley Olsen is an American fashion designer, businesswoman, author, producer and former actress. She rose to prominence by portraying the role of Michelle Tanner on the television series Full House, sharing the role with her younger twin sister Mary-Kate Olsen. They also starred in the films, To Grandmother’s House We Go, Double, Double, Toil and Trouble, How the West Was Fun, It Takes Two, Billboard Dad and in the television series, Two of a Kind. They later went on to run their own fashion brands. She co-founded luxury fashion brands The Row, Elizabeth and James, and the more affordable lines Olsenboye and StyleMint with her twin sister Mary-Kate Olsen. Born Ashley Fuller Olsen on June 13, 1986 in Sherman Oaks, California, she is the daughter of Jarnette “Jarnie” and David “Dave” Olsen. Her parents divorced in 1995. She belongs to English and Norwegian descent. After graduating from Campbell Hall School in 2004, she briefly attended New York University with her twin sister. She made her TV debut in the ABC sitcom Full House with her younger twin sister Mary-Kate. She was in a relationship with Justin Bartha from 2009 to 2011. 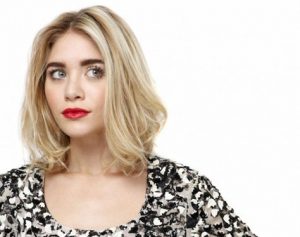 Ashley Olsen Facts:
*She was born on June 13, 1986 in Sherman Oaks, California.
*She is the twin sister of Mary-Kate Olsen.
*She started her acting career when she was nine months old.
*While growing up, she trained ballet, tap, jazz, and hip hop dance.
*She and her twin sister Mary-Kate became the youngest self-made millionaires in American history before they were 10 years old.
*In 2003, she was placed at #61 in the list of ‘100 Sexiest Women in the World’ by FHM.
*In 2007, she was placed at #5 on Forbes List of the 20 Top-Earning Young Superstars with sister Mary Kate.
*Maxim magazine named her #47 in its 2008 Hot 100 ranking of the world’s hottest women.
*She’d a line of clothing with sister Mary-Kate that was sold at Wal-Mart until 2006.
*Her hobbies include dancing, tennis and golf.