Ashley Rickards is an American actress. She is best known for portraying Jenna Hamilton on the MTV comedy-drama series Awkward from 2011 to 2016, and as Samantha “Sam” Walker in The CW’s teen drama series One Tree Hill from 2008 to 2009. In 2017, she had a recurring role in the CW series The Flash. She is also known for her roles in the films Fly Away, Struck by Lightning, Sassy Pants, At the Devil’s Door, A Haunted House 2, and 2017 film The Outcasts. Ashley was also featured in the The Fray music video for “How to Save a Life”. Born Ashley Nicole Rickards on May 4, 1992 in Sarasota, Florida, USA, she was raised on a horse farm. She attended a local Montessori school, and graduated from high school when she was fifteen. In 2014, she began dating musician Tom Cole. 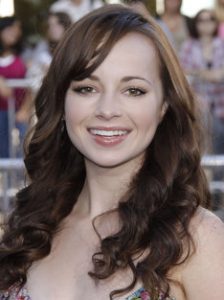 Ashley Rickards Education:
She went to a local Montessori school. She graduated from her high school at the age of 15.

Ashley Rickards Facts:
*She was born on May 4, 1992 in Sarasota, Florida, USA.
*She graduated from high school, at age fifteen.
*She became a member of MENSA in 2011.
*She is an animal lover, and has two pets; a dog, Princess, and Trinny (three-legged cat).
*Her environmental role model Shailene Woodley.
*In her free time, she writes poetry, scripts, and short stories.
*Follow her on Twitter, Facebook and Instagram.