French actress Audrey Tautou is most famous for her portrayal of Amélie Poulain in the 2001 romantic comedy film Amélie, Sophie Neveu in the 2006 film The Da Vinci Code, and as Gabrielle ‘Coco’ Chanel in the 2009 film Coco Before Chanel. She made her film debut in Venus Beauty Institute (1999), for which she won a Cesar Award for Most Promising Actress. For her performance in the 2009 film Coco Before Chanel, she received a BAFTA Award for Best Actress in a Leading Role nomination. Born Audrey Justine Tatou on August 9, 1976, in Beaumont, Puy-de-Dôme, France, she is the oldest children of her parents Évelyne and Bernard Tautou. Her mother is a teacher and her father is a dental surgeon. She has a brother and two sisters. 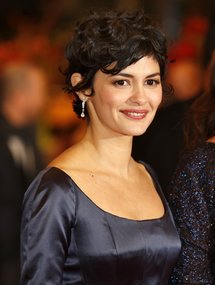 Audrey Tautou Facts:
*She is the oldest of four children.
*She had the desire of becoming an actress from an early age.
*She speaks English and French.
*In 2002, she was named no. 29 in Stuff magazine’s “102 Sexiest Women in the World”.
*She was named after British actress Audrey Hepburn.
*She cites Meryl Streep, Paul Newman, Juliette Lewis, Jodie Foster, and Julianne Moore as big influences.