Aya Cash is an American film and television actress. She is best known for playing Gretchen Cutler, a main character on the FX/FXX comedy-drama You’re the Worst, for which she received a nominations for the Critics’ Choice Television Award for Best Actress in a Comedy Series and the TCA Award for Individual Achievement in Comedy. She became a regular playing the character Callie on the series Traffic Light in 2011. Her film credits include The Oranges, Winter of Frozen Dreams, Sleepwalk with Me, Off Jackson Avenue, Begin Again, The Wolf of Wall Street, The Bits In Between, and The Happy House. Born Aya Rachel Cash on July 13, 1982 in San Francisco, California, USA, she is the daughter of Kim Addonizio, a poet and novelist, and Eugene Cash, a Buddhist teacher. She graduated from the Guthrie BFA acting program at the University of Minnesota. She is married to actor and filmmaker Josh Alexander. 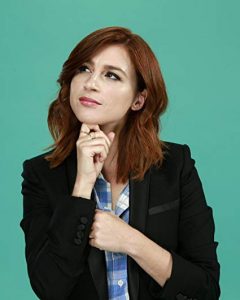 Aya Cash Facts:
*She was born on July 13, 1982 in San Francisco, California, USA.
*She is the daughter of award-winning poet and novelist Kim Addonizio.
*She is a graduate of San Francisco School of the Arts.
*She was named one of the “Backstage 30” actors about to “break out” in Backstage in 2013.
*Indiwire.com named her one of “10 Comic Actresses Who Deserve A Big-Screen Leading Role” in 2014.
*Follow her on Instagram.