Ayelet Shaked is an Israeli politician, computer engineer, and activist who was a member of the Knesset for The Jewish Home from 2013 to 2018, and Minister of Justice from 2015 to 2019. She is widely considered one of Israel’s most active and influential legislators. She was office director for the office of Benjamin Netanyahu from 2006 to 2008. Born Ayelet Ben Shaul on May 7, 1976 in Bavli, Tel Aviv-Yafo, Israel, to a well-educated upper-middle-class Israeli family, her paternal grandmother immigrated to Israel from Iraq as a single mother in the 1950s, and her mother’s family were Jews who immigrated to Israel from Poland and Romania in the 1880s. Ayelet earned a BSc in electrical engineering and computer science from Tel Aviv University. She started her career in the Tel Aviv high-tech industry, working as a software engineer at Texas Instruments and later becoming manager of the company’s marketing. She is married to Ofer Shaked, a fighter-pilot in the Israeli Air Force. They have two children. 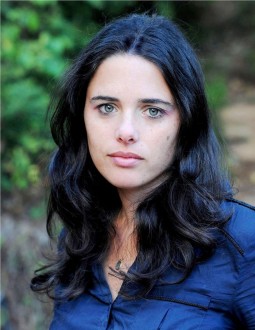 Ayelet Shaked Facts:
*She was born on May 7, 1976 in Bavli, Tel Aviv-Yafo, Israel.
*She obtained a BSc in electrical engineering and computer science at Tel Aviv University.
*She began her career in the Tel Aviv hi-tech industry.
*She is an admirer of Steve Jobs.
*Shaked was influenced by Ayn Rand, in particular The Fountainhead and Atlas Shrugged.
*Shaked describes her personality as ‘intellectual’ and ‘systematic’.
*Her husband, Ofer Shaked, is a fighter-pilot in the Israeli Air Force.
*Visit her official website: www.ayeletshaked.org.il
*Follow her on Twitter, YouTube, Facebook and Instagram.