Ayumi Hamasaki is a Japanese singer, songwriter, actress, model, spokesperson and entrepreneur. Referred to as the Empress of Pop, Ayumi has sold over 50 million records, making her the best-selling Japanese solo artist of all time. She released her debut single “Poker Face” in 1998. Her debut album A Song for ×× (1999) debuted #1 on Oricon’s albums chart, and sold over 1.4 million copies. Before she started her singing career, she had started out as an actress and model. Her most memorable role was Kasane Aihara in Like Grains of Sand. Born on October 2, 1978 in Fukuoka, Fukuoka Prefecture, Japan, her father left the family when she was three years old. She was raised by her mother and grandmother. When she was seven years old, she started modeling for local institutions to help contribute to the family. She moved to Tokyo at fourteen in 1993 to pursue her singing and acting career, and signed with the talent agency SOS. She was married to Manuel Schwarz from 2011 to 2012 and Tyson Bodkin from 2014 to 2016. 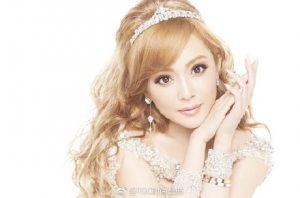 Ayumi Hamasaki Education:
She drop out of high school at 15.

Ayumi Hamasaki Facts:
*She was born on October 2, 1978 in Fukuoka, Fukuoka Prefecture, Japan.
*She became the first artist to have four singles on the Japan top 10 charts simultaneously.
*She won MTV Asia’s Best Female Artist Award in 2002.
*She can write with left and right hands.
*She is a big fan of Madonna.
*Her favorite artists are KEIKO (globe), Miyazawa Rie, Matsuda Seiko, Babyface, En Vogue and Tohoshinki.
*In 2008, she revealed that she became completely deaf in her left ear and that is no longer operable.
*Follow her on Twitter, YouTube, Facebook and Instagram.