Barbara Palvin is a Hungarian fashion model and actress. She is best known for her work with Victoria’s Secret. She was named as the Sports Illustrated Swimsuit Issue “Rookie of the Year” in 2016. She has also appeared on the cover of fashion magazines such as L’Officiel, Vogue, Marie Claire, Glamour Hungary, Elle, Allure, Harper’s Bazaar and Jalouse Magazine. As an actress, she appeared in the 2014 film Hercules. Born in Budapest, Hungary, Barbara shot her first editorial in 2006 for Spur Magazine at 13. She has an older sister, Anita Palvin. 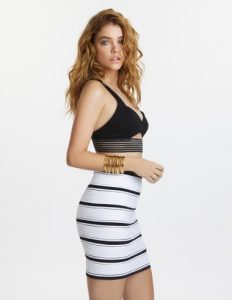 Barbara Palvin Facts:
*Former Victoria’s Secret model.
*She had her runway debut for Prada during fashion week.
*She was ranked #17 on Forbes as one of the highest paid models in the world.
*She was an avid soccer player while growing up in Budapest, Hungary.
*Follow her on Twitter and Instagram.

“Working was a new thing; waking up early in the morning and going to bed late at night… But I’ve met a lot of nice people, I’ve been to New York, London, Paris. I like traveling. Now I cannot imagine my life without modeling.” – Barbara Palvin