American singer-songwriter, musician, and producer, who is best known for his hits “I Write the Songs,” “Can’t Smile Without You”, “Mandy” and “Copacabana”. His career spanned more than five decades. Born Barry Alan Pincus on June 17, 1943 in New York City, New York, he is the son of Edna Manilow and Harold Pincus. He attended and graduated from Eastern District High School in 1961. In 2014, he married his manager Gerry Keif. He was previously married to Susan Deixler. 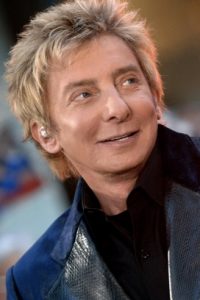 Barry Manilow Facts:
*He grew up in the Williamsburg part of Brooklyn, New York.
*He used to play the piano for Bette Midler.
*He received a Special Tony Award in 1977.
*He used to work at CBS while he was a student in order to pay his expenses.
*Follow him on Twitter, Facebook, YouTube, Myspace, and Instagram.