Benedict Cumberbatch is an English actor of film, television, and theatre. He is the recipient of various accolades including; a Primetime Emmy Award, a British Academy Television Award, and a Laurence Olivier Award. He is best known for roles such as Sherlock Holmes in Sherlock, Peter Guillam in the spy thriller Tinker Tailor Soldier Spy, Stephen Hawking in Hawking, William Pitt in Amazing Grace, and his Academy Award-nominated role as Alan Turing in The Imitation Game. Cumberbatch is also notable for his roles as Stephen Ezard in The Last Enemy, Paul Marshall in Atonement, Bernard in Small Island, and Khan in Star Trek Into Darkness. He has also recorded lines for various radio programs, narrations and video games. 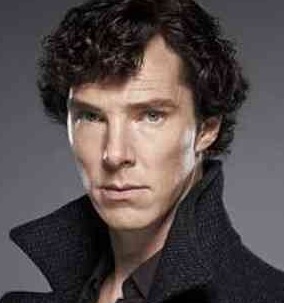 Benedict Cumberbatch Facts:
*He was born on July 19, 1976 in Hammersmith, London, England.
*His parents, Wanda Ventham and Timothy Carlton, are both actors.
*His ancestry includes English, Welsh, Scottish, Cornish, French, Swiss-French, Swedish or German, and Dutch.
*He is a grandson of submarine commander Henry Carlton Cumberbatch, and a great-grandson of diplomat Henry Arnold Cumberbatch CMG.
*He graduated as an arts scholar from Harrow School, and spent a year teaching English at a Tibetan monastery in Darjeeling, India.
*He studied drama at the University of Manchester and he received an M.A. in Classical Acting from the London Academy of Music and Dramatic Art.
*He acted on TV for the first time in an episode of Heartbeat, and began acting in theatre in 2001.
*He dated actress Olivia Poulet in 2001.
*He was ranked #1 in Empire Magazine’s “100 Sexiest Movie Stars” in 2013.
*He was named one of the most influential people in the world by TIME magazine in 2014.
*He married director and actress Sophie Hunter in February 2015. They have two sons, Christopher Carlton and Hal Auden.
*He is good friends with Keira Knightley, Tom Hardy, Matthew Goode, Alice Eve, Robert Rinder, Jonny Lee Miller, Martin Freeman, Gary Oldman, James McAvoy, Zachary Quinto and Tom Hiddleston.
*He is a huge fan of Robert Downey Jr.
*He enjoy skydiving, hot-air ballooning, scuba diving and snowboarding.
*He identifies as a feminist.
*He is a LGBT rights supporter.