Bernard Tomic is an Australian professional tennis player who achieved a career-high singles ranking of World No. 17 on January 11, 2016. As a junior, Tomic had a successful career in which he won an Orange Bowl title and two junior Grand Slam singles titles, the 2008 Australian Open and 2009 US Open. He won the 2013 Apia International Sydney, 2014 Claro Open Colombia, 2015 Claro Open Colombia and the 2018 Chengdu Open. He also competed at the 2012 Summer Olympics. Throughout his career, Tomic has been known for his behaviour on and off the court. Born on October 21, 1992 in Stuttgart, Germany, to parents Adisa Ady and John Tomic, the family migrated to Gold Coast, Queensland, Australia in 1996 when Tomic was three years old. His younger sister Sara is also a professional tennis player. 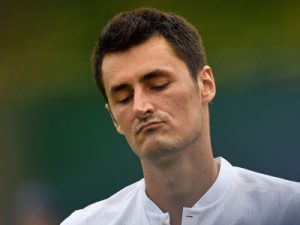 Bernard Tomic Facts:
*He was born on October 21, 1992 in Stuttgart, Germany.
*His mother is Bosnian and his father is Croatian.
*He turned professional in 2008.
*Visit his official website: www.bernardtomic.com
*Follow him on Facebook.