Milo Manheim is an American actor. He is best known for his portrayal of Zed in the Disney Channel Original Movie Zombies, and its sequel, Zombies 2. Manheim won the “Best Leading Actor” award for his role in the musical “Generation Me” at the 2017 New York Musical Festival. In 2018, he competed on season 27 of Dancing with the Stars with Witney Carson and finished in second place. Born on March 6, 2001 in Los Angeles, California, he is the only son of Emmy and Golden Globe award winner Camryn Manheim. Manheim attended the Crossroads School in Southern California. He began his acting career in a local after-school program in Culver City at the age of six, and has performed in 15 musicals with Liza Monjauze Productions. He was in a relationship with Instagram star and model Holiday Mia Kriegel until they broke up in late 2018. 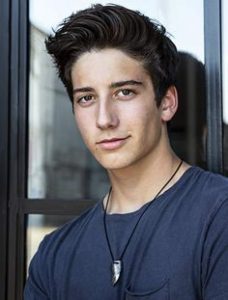 Milo Manheim Facts:
*He was born on March 6, 2001 in Los Angeles, California, USA.
*His parents are Jeffrey Brezovar and Camryn Manheim.
*He was discovered when casting director Amber Horn saw his performance as “Roger” in the musical Rent.
*He was cast in the Disney Channel original movie Zombies.
*He plays guitar, drums, piano, and ukulele.
*He enjoys playing volleyball, soccer and skiing.
*His favorite movie is The Truman Show, and his favorite TV show is The Office.
*He has two orange cats named Geoff and Pirate.
*Visit his official website: www.milomanheim.com
*Follow him on Twitter, Facebook and Instagram.