Bianca Andreescu is a Canadian professional tennis player who achieved a career-high singles ranking of World No. 4 on October 28, 2019. Turning professional in 2017, Andreescu beat Serena Williams in straight sets at the 2019 US Open, becoming the first Canadian to win a Grand Slam singles title, the first woman to win the US Open in her debut appearance, and the first player born in the 2000s to win a Grand Slam tournament. Born Bianca Vanessa Andreescu on June 16, 2000 in Mississauga, Ontario, to Romanian parents Nicu and Maria Andreescu, Andreescu family moved to her parents’ native Romania, where she started played tennis at age seven. The family returned to live in Canada when she was 11, and Andreescu began training with Tennis Canada’s U14 Nation Training Center for the 2011-2012 season. She made her ITF debut in 2015 and won her first career title at the Australian Open in 2016. Andreescu earned her first WTA title with a win at the 2019 BNP Paribas Open. 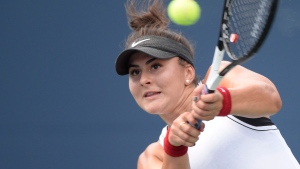 Bianca Andreescu Facts:
*She was born on June 16, 2000 in Mississauga, Canada.
*She started playing tennis at age seven.
*She did her high-school diploma online at Bill Crothers Secondary School in Unionville.
*She turned professional in 2017.
*In 2017, she was named the Tennis Canada Female Player of the Year.
*On August 11, 2019, she became the first Canadian woman to win the Canadian Open in singles since Faye Urban in 1969.
*She beat Serena Williams in straight sets at the 2019 US Open.
*She became the first Canadian to win a grand slam singles title after she defeated Serena Williams in the 2019 US Open final.
*Her coach’s name is ‎Sylvain Bruneau.
*She is fluent in Romanian.
*Follow her on Twitter, Facebook and Instagram.