Film and television actor Billy Campbell is known for his roles in television, such as Once and Again, In the Beginning, Crime Story, The 4400, and Armistead Maupin’s Tales of the City, and in the films The Rocketeer, Ghost Town, Dracula and Enough. Campbell was born William Oliver Campbell on July 7, 1959 in Charlottesville, Virginia. In 1991, he began dating actress Jennifer Connelly. They broke up in 1996. 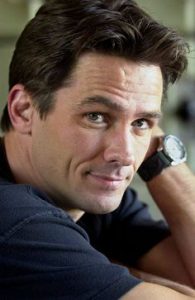 Billy Campbell Facts:
*His parents separated when he was two years old.
*One of People magazine’s 50 Most Beautiful People in the World (2000).
*He is a rugby enthusiast, having played rugby with the Chicago Lions RFC and the Santa Monica Rugby Club.
*He was the runner-up for the role of William Riker on Star Trek: The Next Generation.
*Catch him on Twitter.

“The first trip I remember taking was on the train from Virginia up to New York City, watching the summertime countryside rolling past the window. They used white linen tablecloths in the dining car in those days, and real silver. I love trains to this day. Maybe that was the beginning of my fixation with leisurely modes of travel.” – Billy Campbell