Bonnie Raitt is an American blues singer, songwriter and slide guitar player. She is known for her music skills and hit albums such as Nick of Time, Slipstream, Luck of the Draw, and Longing in Their Hearts. Her hit single include ‘Something to Talk About’, ‘Love Sneakin’ Up on You’, and ‘I Can’t Make You Love Me’. She has received ten Grammy Awards. Rolling Stone ranked her #50 in their list of the “100 Greatest Singers of All Time”, and ranked #89 on their list of the “100 Greatest Guitarists of All Time”. Bonnie was born Bonnie Lynn Raitt on November 8, 1949 in Burbank, California, to John Raitt and Marjorie Haydock. She was married to Michael O’Keefe from 1991 to 1999. 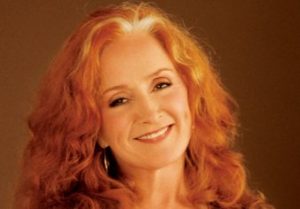