Borna Ćorić is a Croatian professional tennis player who achieved a career-high singles ranking of World No. 12 on November 5, 2018. He is currently the No. 1 Croatian singles tennis player. Turning professional in 2013, Ćorić has won two ATP Tour singles titles. Among his most notable victories is his win over Rafael Nadal in the quarterfinals of the 2014 Swiss Indoors. 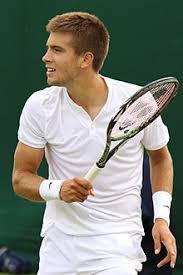 Born on November 14, 1996 in Zagreb, Croatia, to parents Damir and Zeljka Coric, he has one older sister named Bruna. Ćorić was only 5 when he started playing tennis and began playing in Junior Grand Slam Tournaments in 2012. In 2015, Ćorić began dating Valentina Miletic.

Borna Coric Facts:
*He was born on November 14, 1996 in Zagreb, Croatia.
*He started playing tennis at the age of five.
*Growing up, he idolized Rafael Nadal and Goran Ivanisevic.
*He was the winner of 2013 US Open junior tournament.
*He turned professional in 2013.
*In 2014, Coric became the youngest player to crack the ATP Top 200 since Rafael Nadal in 2003.
*He was on the cover of Vogue’s September 2015 issue.
*He is fluent in Croatian, English, and German.
*In June 2020, he tested positive for COVID-19 after attending the Adria Tour.
*Follow him on Twitter, TikTok, Facebook and Instagram.