Brandon Jones is an American actor, musician, and producer. He is best known for his portrayals of Liam on the series Lie to Me, Andrew Campbell in Pretty Little Liars, Liam in The Fosters and as Charlie Russell on CSI: Crime Scene Investigation. He appeared in the web series If I Can Dream alongside Justin Gaston. Jones performed as a lead singer as part of the electronic duo York. He released his debut single, Wanna be Known in 2011. 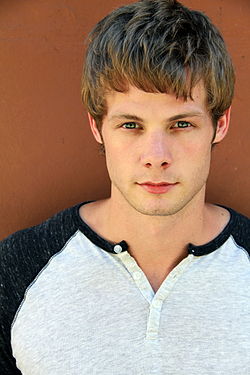 Born Brandon William Jones on May 7, 1988 in Greensboro, North Carolina, to parents Kimberly and Reid Jones, he is an only child. Jones attended the Northeast Guilford High School in North Carolina and graduated in 2006. He moved to Los Angeles in 2009; he has modeled for Bruce Weber for Abercrombie & Fitch’s holiday campaign.

Brandon Jones Facts:
*He was born on May 7, 1988 in Greensboro, North Carolina, and was raised in the nearby town of McLeansville.
*He was involved in football, wrestling, and track in high school.
*He made his debut in 2009 in an episode of 90210.
*He was cast as Andrew Campbell in the teen mystery thriller series, Pretty Little Liars.
*He played the role of Charlie Russell in the crime drama series, CSI: Crime Scene Investigation
*He plays the guitar.
*He is a big paranormal enthusiast.
*He is predominantly right-handed, but he only swings left-handed when playing sports like golf or baseball.
*He has a tattoos; Mjöllnir on his upper back, heart on his right hand, the Egyptian Ankh tattooed on his left wrist, and the roman numeral 11 tattooed on his left middle finger.
*Follow him on Twitter and Instagram.