Brie Larson is an American television and movie actress, filmmaker and singer. She is best known for her roles in the films 21 Jump Street, Short Term 12, Room, The Spectacular Now, Trainwreck and Captain Marvel. For her performance in Room, she won the Academy Award for Best Actress. She was nominated for the Independent Spirit Award and a Critics’ Choice Award for her role in independent film Short Term 12. She appeared as a main cast member in the 2001 short-lived sitcom Raising Dad. With the origin film Captain Marvel (2019), she became the first solo female superhero in the Marvel Cinematic Universe. Besides her career in acting, she is also a professional singer. She released her debut studio album Finally Out of P.E. on October 18, 2005, via Casablanca Records. Born Brianne Sidonie Desaulniers on October 1, 1989 in Sacramento, California, to parents Heather and Sylvain Desaulniers, she has a younger sister named Milaine. Larson was mostly homeschooled and started studying drama at the early age of 6, as the youngest student ever to attend the American Conservatory Theater in San Francisco. She began her career as a child actor, performing in sketches on The Tonight Show with Jay Leno, and made her film acting debut in Special Delivery (1999). She was in a relationship with musician Alex Greenwald from 2013 to 2019. 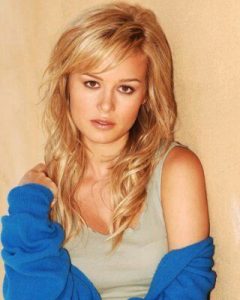 Brie Larson Facts:
*She was born on October 1, 1989 in Sacramento, California, USA.
*She began acting at the age of 8.
*She moved to Los Angeles, California, in 1998.
*Her first acting job was as a sketch actress on The Tonight Show with Jay Leno.
*For her role as Ma in the 2015 movie Room, she won the Academy Award for Best Actress.
*She wrote and recorded the song “Invisible Girl” at age 15.
*She sang the song ‘Coming Around’ in her movie Hoot (2006).
*She is good friends with Logan Lerman, Sara Paxton, and Cody Linley.
*In May 2016, Larson became engaged to Phantom Planet singer Alex Greenwald.
*Follow her on Twitter and Instagram.