American singer-songwriter who made her chart debut in November 1998 with “…Baby One More Time”, which attained global success and reached the top position of every major countries charts. It was followed by the release of her debut studio album, …Baby One More Time (1999), which opened at number one on the Canadian Albums Chart and US Billboard 200, being later certified fourteen-times platinum by the Recording Industry Association of America. Her second studio album, Oops!… I Did It Again (2000), became the fastest-selling album ever by a female act in the US with 1,319,193 units sold in its opening week. It spawned four singles: “Oops!… I Did It Again”, “Stronger”, “Lucky”, and “Don’t Let Me Be the Last to Know”. Referred to as the “Princess of Pop”, Spears is the recipient of various accolades including; a Grammy Award; seven Guinness World Records; six MTV Video Music Awards, including the Michael Jackson Video Vanguard Award; seven Billboard Music Awards, including the Millennium Award; the inaugural Radio Disney Icon Award; and a star on the Hollywood Walk of Fame. She has also appeared in several television shows, films, and commercials. She starred in the critically panned movie, Crossroads (2002). Born Britney Jean Spears on December 2, 1981 in McComb, Mississippi, to parents Lynne Irene Bridges and James Parnell Spears, her siblings are Jamie Lynn Spears and Bryan James. Spears was baptized as a Southern Baptist and sang in a church choir as a child. She studied at NYC’s Professional Performing Arts School. She married Kevin Federline in 2004, and the couple had two sons named Jayden and Sean, before getting divorced in 2007. She was previously married to Jason Allen Alexander. From 2014 to 2015, Spears dated Charlie Ebersol. In 2017, she began dating model Sam Asghari. 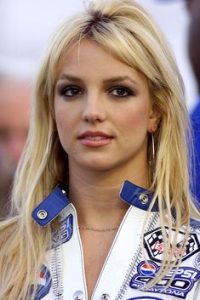 Britney Spears Facts:
*She was born on December 2, 1981 in McComb, Mississippi, USA.
*Her parents are Lynne Irene and James Parnell Spears.
*She was raised in Kentwood, Louisiana and was the middle of three children.
*She was rejected after auditioning for the 1990s revamp of The Mickey Mouse Club.
*She signed a recording contract with American record label Jive Records in order to launch her career. (1997)
*She made her chart debut in November 1998 with “…Baby One More Time”.
*Her sophomore album, “Oops!…I Did It Again”, became the highest debut week album by a female with over 1.3 million copies.
*She became the youngest female artist in the United States to have five albums debut at No. 1.
*People Magazine named her one of the top 50 Most Beautiful People in the World in 1999 and 2002.
*She made her feature film debut in a starring role in Crossroads (2002).
*Her idol is Madonna.
*Her wardrobe stylist was actress Claudette Lalí.
*She is a big fan of Björk.
*Madonna, Michael Jackson and Janet Jackson are her inspirations.
*She has a tattoo of a small black-winged fairy on the back of her spine.
*She shares her birthday with Lucy Liu, Nelly Furtado and Gianni Versace.
*Visit her official websites: www.britneyspears.com, www.britney.com
*Follow her on Twitter, YouTube, Facebook and Instagram.