Brock Lesnar is a professional wrestler and former amateur wrestler, professional American football player, and mixed martial artist. He was the 2002 King of the Ring. He defeats Intercontinental Champion Rob Van Dam to become the 2002 King of the Ring. He joined the UFC in 2007. Brock was born to Stephanie and Richard Lesnar in Webster, South Dakota, USA as Brock Edward Lesnar. He belongs to German descent. His siblings are Brandi, Troy and Chad. He has been married to Rena Mero since May 2006. They have two sons, Turk & Duke. He also has two kids from a previous relationship. 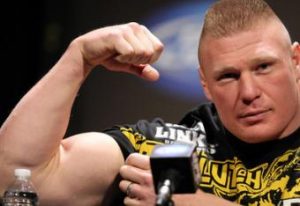 Brock Lesnar Facts:
*He is of German descent.
*He grew up on his father’s dairy farm.
*He joined the UFC in 2007.
*He is the only person to hold championships in the NCAA, UFC and WWE.
*He was a two time state high school wrestling champion.
*Follow him on Twitter and Facebook.