Brooke Shields is an American actress and supermodel. She is best known for portraying Susan Keane on the NBC sitcoms Suddenly Susan from 1996 to 2000. In film, she is best known for the movies The Blue Lagoon (1980) and Endless Love (1981). Her other well-known television credits include That ’70s Show, Lipstick Jungle, Law & Order: Special Victims Unit, The Middle, and Army Wives. Born Brooke Christa Shields on May 31, 1965, in New York City, she is the only child of Terri and Frank Shields. She began her career in a TV commercial, appearing in an Ivory Snow advertisement. She studied at New Lincoln School until eighth grade, followed by Dwight-Englewood School in Englewood, New Jersey. She graduated with a bachelor’s degree in Romance Languages from Princeton University in 1987. In 2001, she married Chris Henchy with whom she has two daughters; Rowan and Grier. She was previously married to Andre Agassi from 1997 to 1999. 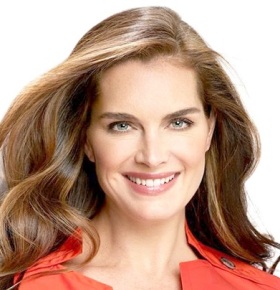