Brooklyn Decker is an American fashion model and actress born in Kettering, Ohio. She is most known for her appearances in the Sports Illustrated Swimsuit Issue. She appeared in the 2006, 2007, 2008, 2009, 2010, and 2011 Sports Illustrated Swimsuit Issues. She also appeared on the cover of Sports Illustrated Swimsuit Issue in 2010. She has made guest appearances in a number of television shows, such as Chuck, Ugly Betty, The League, and Royal Pains. Her movie credits include Just Go With It, Battleship, Results, What to Expect When You’re Expecting and Band Aid. Born as Brooklyn Danielle Decker in Breckenridge, Minnesota, on April 12, 1987, to Tessa Decker and Stephen Decker, she grew up in Charlotte, North Carolina. She married former tennis player Andy Roddick in April 2009. They have a son together. 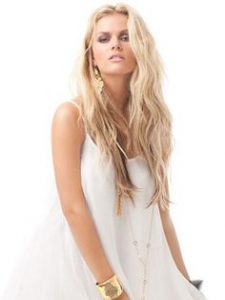 Brooklyn Decker Facts:
*She was born in Kettering, Ohio, and grew up in Charlotte, North Carolina.
*At age 16, she was discovered in a Charlotte shopping mall.
*She designed the cover of the 2010 Sports Illustrated Swimsuit.
*Models.com ranked her #5 in the Top Sexiest Models list.
*She was ranked #36 Sexiest Woman by the Spanish version of DT magazine in 2011.
*She is a huge fan of the Dave Matthews Band.
*Follow her on Twitter, Facebook and Instagram.