Bruno Mars is a Grammy Award-winning American singer and songwriter. He is best known for the hit songs “Uptown Funk,” “Grenade,” “Nothin’ on You,” “Just the Way You Are,” and “Locked Out of Heaven”. He has released three studio albums, two EPs, twenty-two singles (seven as a featured artist) and three promotional singles. His second album, Unorthodox Jukebox, was released in December 2012, hit #1 on the U.S. Billboard. Born Peter Gene Bayot Hernandez in Honolulu, Hawaii, on October 8, 1986, to Peter Hernandez and Bernadette San Pedro Bayot, he grew up in the Waikiki neighborhood of Honolulu. He is of Puerto Rican, Hungarian and Ukrainian descent on his father’s side, and of Filipino descent on his mother’s side. He has five siblings. He has been in a relationship with model/actress Jessica Caban since 2012. He was previously in a relationship with singer Rita Ora. 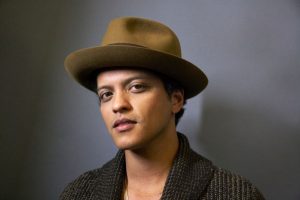 Bruno Mars Facts:
*He can play guitar and drum kit.
*After college, he moved to Los Angelesto be a musician.
*Growing up, he was widely influenced by Elvis Presley and Michael Jackson.
*He was nicknamed “Bruno” by his father, after Bruno Sammartino.
*In 2011, he was named one of Time’s 100 most influential people in the world.o.
*Visit his official website: www.brunomars.com
*Follow him on Twitter, YouTube, Facebook and Instagram.