Burak Deniz is a Turkish actor. He is best known for his portrayal of Murat Sarsılmaz in the television series Aşk Laftan Anlamaz, and for his role as Barış Aktan in the television series Bizim Hikaye. He has also starred in Arada, Yarim Kalan Aşklar, and Maraşlı. From 2013 to 2015, Deniz played the supporting role of Aras in the TV series Medcezir. 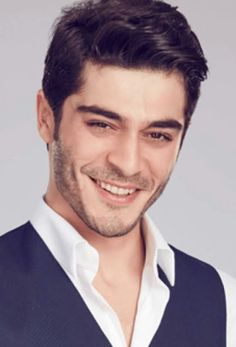 Born on February 17, 1991 in Istanbul, Turkey, he grew up in İzmit. Deniz completed his schooling from İzmit 50 Yıl Cumhuriyet Primary School and Gazi High School, and studied History of Art at the Çanakkale 18 Mart University. He dated Turkish actress Büşra Develi from 2015 to 2018.

Burak Deniz Facts:
*He was born on February 17, 1991 in Istanbul, Turkey.
*He made his TV debut in the TV series Kolej Günlüğü.
*His mother died in 2014, and his father died of a heart attack in 2020.
*In 2017, Deniz won GQ Men of the Year award, for Rising Player of the Year.
*Visit his official website: www.burakdeniz.com.tr
*Follow him on Twitter and Instagram.