Caitlin Upton is an American fashion model and former beauty queen who won Miss South Carolina Teen USA 2007 beauty pageant. She competed in the Miss Teen USA 2007 pageant, and placed third runner-up. Her name has become a top search on Google and YouTube because of a very funny response she gave to a question during the recent beauty contest. As a model, she has advertised for many brands such as Nautica and Wrangler. She also appeared in Seventeen, Cosmo Girl and American Cheerleader. She was in the music video of the Rivers Cuomo’s and Weezer’s 2008 “Pork and Beans.” Born Lauren Caitlin Upton on March 27, 1989 in Lexington, South Carolina, USA, she moved to Los Angeles, California to pursue modeling career. After graduating from Lexington High School in South Carolina, she attended Appalachian State University in North Carolina. She was signed a deal with Donald Trump’s modeling agency in New York City. She married personal trainer Charlie McNeil in 2016. 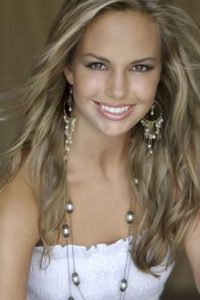 Caitlin Upton Facts:
*She was born on March 27, 1989 in Lexington, South Carolina, USA.
*She rose to fame after flubbing up a geography interview question at the 2007 Miss Teen USA pageant.
*She was appeared in Rivers Cuomo’s and Weezer’s 2008 “Pork and Beans” music video.
*She is now working as a real estate agent and dabbles in acting.
*Follow her on Twitter, Facebook and Instagram.