Michelle Waterson is an American mixed martial artist who is currently competing in the Ultimate Fighting Championship. She was ranked #1 women’s atomweight fighter in the world between 2013-2014. She was also ranked the #10 pound-for-pound female MMA fighter by MMARising.com in 2013. Born Michelle E. Waterson on January 6, 1986 in Colorado Springs, Colorado, USA, to a Thai mother and a Caucasian father, Michelle was raised in Aurora. After graduating from Aurora Central High School, she began her modeling career in 2004. She is married to Joshua Gomez. She gave birth to her daughter Araya on March 18, 2011. 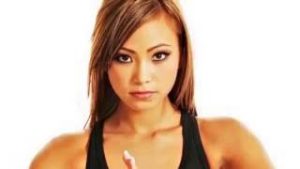 Michelle Waterson Facts:
*She was born to a Thai mother and Caucasian father.
*She attended and graduated from Aurora Central High School.
*She used to work as a model before making her MMA debut in 2007.
*She was a contestant on the Muay Thai-themed Fight Girls reality show on the Oxygen television network.
*She has a background in Karate, holding a black belt, Wushu and Muay Thai along with MMA training.
*She won the Invicta FC Atomweight Championship on April 5, 2013.
*She was featured in the music video for the song Head Crusher by Dave Mustaine and Megadeth.
*Follow her on Twitter, Facebook and Instagram.