Calista Flockhart was born Calista Kay Flockhart on November 11, 1964 in Freeport, Illinois, the daughter of Kay and Ronald Flockhart. She is an actress, known for playing the title role in the Fox television comedy-drama series Ally McBeal and for playing Kitty Walker McCallister on the ABC drama Brothers & Sisters. Calista was named after two of her great-grandmothers, who both had the middle name “Calista”. She has been married to Harrison Ford since 2010. She is with the height 5 feet 5½ inches in tall. She wears a size 7.5 shoe and her zodiac sign is Scorpio. 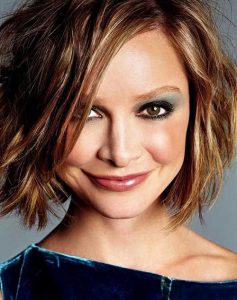 Calista Flockhart Facts:
*She belongs to Irish, Scottish, German and English descent.
*She attended Rutgers University in New Jersey to study acting.
*She adopted a son named Liam in 2001.
*She had a dog named Webster. He was her best friend until he died.