Camila Alves is a Brazilian-American model and designer, known for her Muxo handbag line. She was signed on as the new face for Macy’s clothing line “I.N.C. International Concepts” in April 2012. She hosted the third season of the Bravo network reality television series Shear Genius in 2010. Born on January 28, 1982 in Belo Horizonte, Minas Gerais, Brazil, she was raised by her mother, an artist and designer, and her father, a farmer. Alves spent her childhood between the beaches of Bahia and the farmlands of Minas Gerais. She moved to New York City at 19 to pursue a career as a fashion model. She is married to American actor Matthew McConaughey. They have three children. 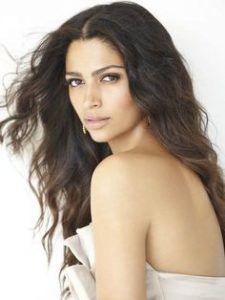 Camila Alves Facts:
*She was born in Belo Horizonte, Minas Gerais, Brazil on January 28, 1982.
*She used to work as a waitress before becoming a designer.
*She met her future husband at a bar on Sunset Boulevard.
*In 2015, she became an American citizen.
*She loves chocolate, peppermint tea, chips and salsa.
*Follow her on Twitter, Facebook and Instagram.