Camille Guaty is an American actress of film and television. She is best known for roles such as Olivia in Raising Dad, Daisy Salinas in Gotta Kick It Up!, Maricruz Delgado in Prison Break, Megan O’Brien in Scorpion, Piper Nielsen in Las Vegas, and Franny Rios in The Nine. Her other notable works include Daytime Divas, The Vampire Diaries, Cupid, Family Guy, Crush, and A Futile and Stupid Gesture. Aside from her career as an actress, she is also a singer, and auditioned for Popstars, a reality TV show in 2000. Born Camille Marie Guaty in Santa Clara County, California, on June 28, 1978, to a family of Cuban and Puerto Rican descent, she grew up in Northern California and New Jersey. She earned her degree from Boston University and continued her education at the Royal Academy of Dramatic Arts (R.A.D.A) in London. She moved to Los Angeles in 2001 to pursue her acting career. She has been married to Sy Rhys Kaye since 2011. 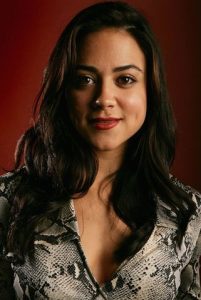 Camille Guaty Facts:
*She belongs to Cuban and Puerto Rican descent.
*Her mother is originally from the Canary Islands.
*She moved to Los Angeles to pursue an acting career.
*She played Megan O’Brien-Dodd in the first and second seasons of Scorpion.
*Follow her on Twitter and Instagram.