Bella Thorne is an American actress and singer. She became recognized for her role as CeCe Jones on the Disney Channel series Shake It Up. She portrayed Ruthy Spivey in the television series My Own Worst Enemy, and Tancy Henrickson in the fourth season of Big Love. She is also known for her performances in Blended, Alexander and the Terrible, Horrible, No Good, Very Bad Day, The DUFF, Perfect High and Big Sky. For her performance in the series My Own Worst Enemy, she won a Young Artist Award for Best Performance. Born Annabella Avery Thorne on October 8, 1997 in Pembroke Pines, Florida, she is the daughter of Tamara and Reinaldo Thorne, and younger sister to Dani Thorne, Remy Thorne, and Kaili Thorne. She is of Cuban descent on her father’s side, and of Irish, Italian, English, German, and Welsh descent on her mother’s side. Her father Reinaldo passed away in a car accident in 2007. At the age of six, she got her first movie role in the film “Stuck On You” as a fan on the sidelines. From 2015 to 2016, she was in a relationship with Gregg Sulkin. 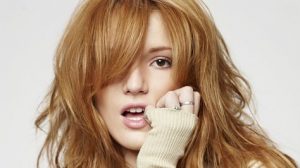 Bella Thorne Education:
Because of her dyslexia problem, she left the school and went on to study at home.

Bella Thorne Facts:
*She is of Cuban, Irish, and Italian descent.
*Her father died in 2007 in a car accident.
*She was diagnosed with dyslexia in the second grade.
*Her signature red hair is dyed from a natural blonde.
*Spanish was her first language.
*She has 2 pet dogs, and six cats and a turtle.
*She dated Chandler Parsons, Tyler Posey, and Scott Disick.
*Visit her official website: www.bellathorneofficial.com
*Follow her on Twitter, YouTube, Google+, Facebook and Instagram.