Camille Rowe is a French–American model who was on the cover of Playboy in 2016. She has appeared on numerous fashion magazines, including Vogue Paris, Marie Claire Italia, Vogue Italia, Madame Figaro, Vogue España, and Elle France. She has also appeared for several advertisements under leading brands / fashion houses such as Louis Vuitton, Opening Ceremony, Gap Inc., Rag & Bone, H&M, Abercrombie & Fitch, Tommy Hilfiger, Seafolly, Tory Burch, Ralph Lauren, and Adidas Originals. She also walked for the Victoria’s Secret Fashion Show in 2016. Born Camille Chrystal Pourcheresse on January 7, 1990 in Paris, France, to Darilyn Rowe-Pourcheresse, an American, and René Pourcheresse, a French, Rowe spent her growing years between France, New York, and California. She began her modeling career in 2008 after being discovered in a cafe in Le Marais in Paris while studying at university and became the face of Chloé. She dated pop star Harry Styles from 2017 to 2018. Previously, she dated American musician Andrew VanWyngarden and Australian multi-instrumentalist and singer, Cam Avery. 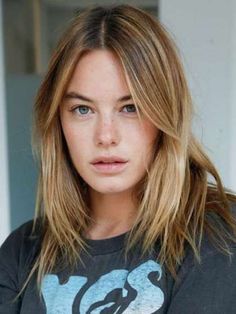 Camille Rowe Facts:
*She was born on January 7, 1990 in Paris, France.
*Her father is from France and her mother is from USA.
*She grew up in France, New York, and California.
*She appeared on the cover of Playboy in 2016.
*She is a dual American/French citizen.
*She speaks French fluently.
*Follow her on Twitter, Facebook and Instagram.