Carey Mulligan is a British actress and singer best known for her appearances in Never Let Me Go, Drive, and The Great Gatsby. She played Jenny Mellor in the 2009 film An Education, for which she received a BAFTA Award. She made her film debut as Kitty Bennet in Pride & Prejudice in 2005. She has had roles in several British television programmes such as Doctor Who, Bleak House, and Northanger Abbey. Mulligan was born on May 28, 1985 as Carey Hannah Mulligan in Westminster, London, England, to Nano, a university lecturer, and Stephen Mulligan, a hotel manager. She has an older brother named Owain. She is of Irish descent on her father’s side, and of Welsh descent on her mother’s side. She has been married to singer Marcus Mumford since April 2012. They have a daughter together. 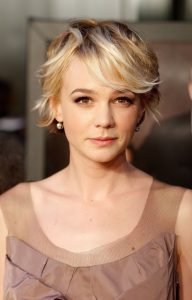 Relationships / Affairs / Boyfriend:
She was in a relationship with Shia LaBeouf from 2009 to 2010.
She married her boyfriend of 14 months Marcus Mumford in Somerset following a 9-month-long engagement in April 2012.

Carey Mulligan Facts:
*She belongs to Irish and Welsh descent.
*She made her professional acting debut at 19.
*She became the ambassador of Alzheimer’s Society in 2012.
*She is good friends with Zoe Kazan.
*Her acting idols are Marion Cotillard, Cate Blanchett and Kate Winslet.