Carin da Silva is a Swedish singer, professional dancer and television presenter. She is best known for her appearances in the TV4 celebrity dancing show Let’s Dance three years in a row. Silva was a three-times Swedish junior champion in Latin American dance, standard dance, and ballroom dancing. She represented her country (Sweden) in both the European and World Championships in dancing. Born Carin Elisa da Silva on November 16, 1984, in Gothenburg, Västra Götalands län, Sweden, her brother, Daniel da Silva, is also a dancer. She was educated at Kongahållagymnasiet in Kungälv and Balettakademien in Gothenburg. She has been married to Niklas Persson since August 8, 2009. Together they have one son, Theo da Silva. 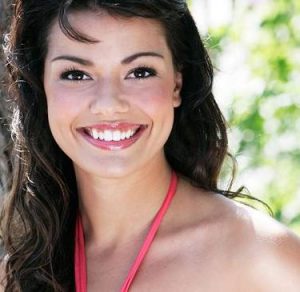 Carin da Silva Facts:
*She competed in the Swedish dance show “Let’s Dance” in 2006, 2007 and 2008.
*She runs a podcast with Adam Alsing and Daniel Breitholtz on TV3.
*She was chosen as “Swedens sexiest woman” by the magazine QX in February 2008.
*She was a member of the Swedish music group Cosmo4. (2005 – 2006)
*In 2012, she launched a dog cafe called Coffee & Friends.
*She has a dog named Leia.
*Visit her official website: www.carindasilva.se
*Follow her on Twitter, Facebook and Instagram.